I’ve been using miniature Jorgensen clamp to hold small parts to cut them on the band saw or sand them on the big drum. I decided to experiment and these seem to work pretty good.

These can be made in any size you desire. Too, there are various ways you can approach some aspects of the construction. I will attempt to point out alternatives as they become relevant. 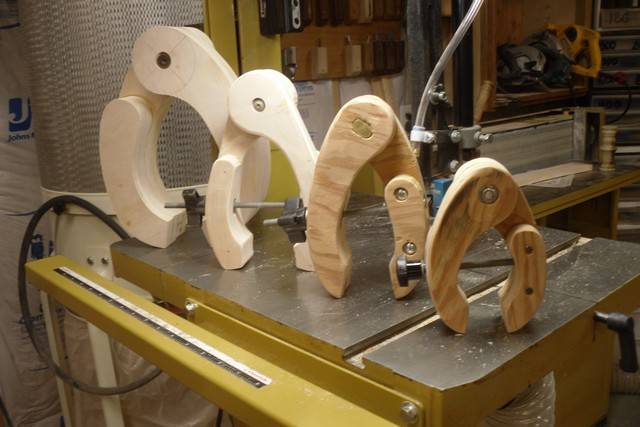 When done, you could reduce the thickness at the clamp area, if you found it necessary for smaller work.

To build this clamp, you need the parts listed below. All the parts can be had from any decent hardware supply.

1) some scrap plywood or a good hardwood sufficient to make your clamp;

These are quite easy to make and take only a little while. Most the time is spend waiting for the glue to dry.

Layout of the clamp is simple. You can freehand it, use commercial templates, jar tops, etc.), or do a little of both. I chose the latter.

I started layout my clamp using a circle template jig to establish the pivot area. For example, my first clamp was built off a 2-3/8” circle size, which I thought appropriate for the size clamp I was making. For the arm, I used an arc template. I chose an arc that gave me the length of arm I was shooting for. 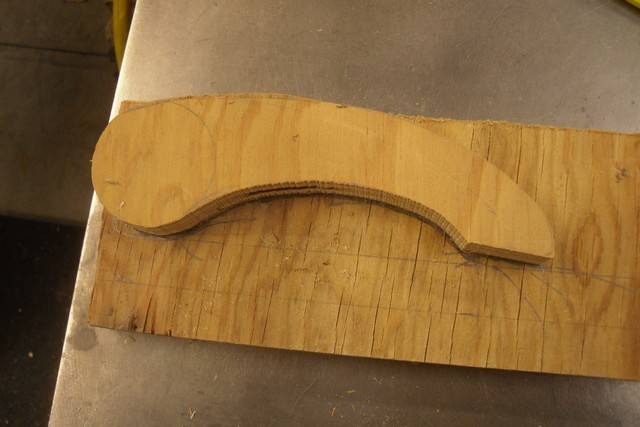 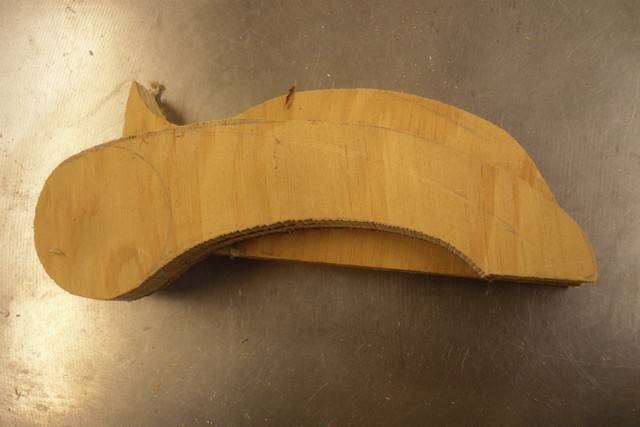 Clamps arms can be varied in length. A shorter clamp may be more comfortable in some applications. On the other hand, making the clamp longer will increase its capacity.

For the clamping ends of the clamp, I found it beneficial to extend the ends at least an inch or more. For my first clamp, I roughed in the ends freehand

I also put a little slant on the parts that hold a piece. The slant tilts back toward the arc of the half of the clamp they are on. When the clamps are opened wider, the angle keeps the jaws more parallel. This seems to help them hold better as they open wider.

If the clamp ends are kept straight, you can glue hard wood replacements to them at any time to try different shapes.

Once the first side laid out, cut it out on a band saw or use a jig saw and a fine blade. If necessary, a hole can be drilled in the previously marked center of the circle to allow the material to be secured during cutting. Another alternative would be to use a coping saw.

Once the first piece is cut, use it to draw a second, identical piece for the opposing jaw.

Also use the first piece to draw two duplicates of the first few inches of the clamping area. These can extend most the way down the arm, but should stop about an inch from the pivot area, so they do not interfere with the operation of the clamp. 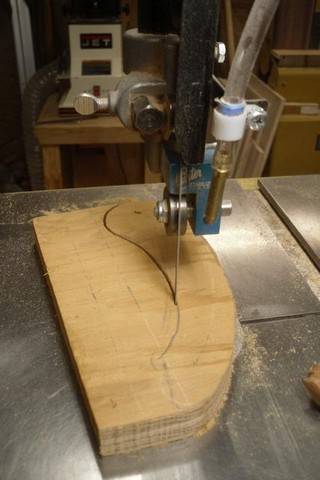 If you desire sand the surfaces, it is much easier to smooth the backs of the short pieces before gluing is started.

Glue the smaller pieces to the full pieces, as shown in the photo. Both sides should be assembled identically. For example, when you lay them one beneath the other, both pivots would be on the left and both arms would extend to the right. The short pieces, the spacers will be lined up with and glued to the top of right ends of the arms.

You can just clap the pieces and wait for them to dry. You can also nail or screw the pieces. as they dry. I prefer clamping, so I can modify the ends without concern about a saw blade encountering nails or screws.

Allow the glue to harden. 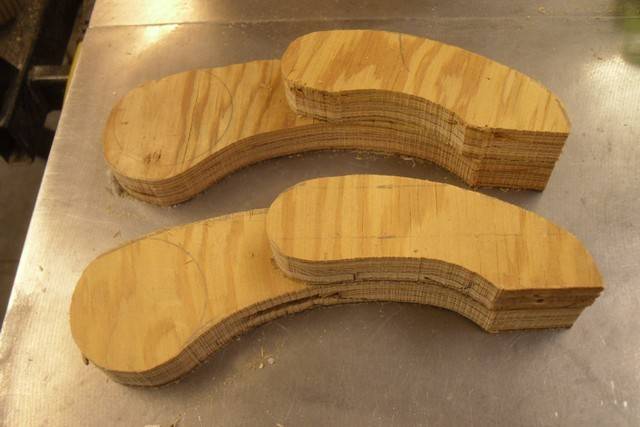 You have several options for joining the two halves of the clamp and creating a pivot. You can:

2) use a toilet mounting bolt, nut and washer;

3) use an allen head screw, two washers and a nut;

4) use a specialty furniture screw (with an Allen head (my favorite));

5) use a standard screw, two washers and a nut; or,

7) use a dowel, two screws and two washers. 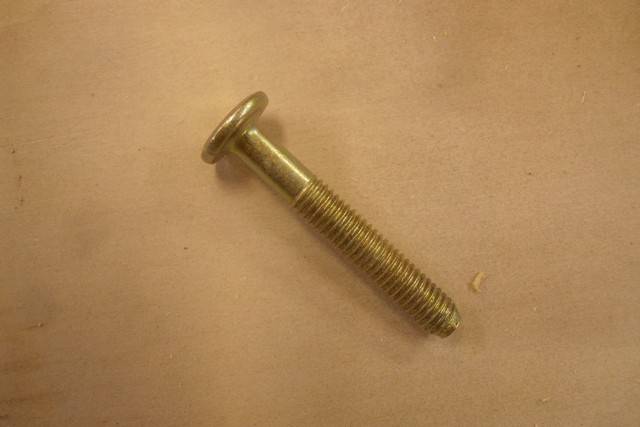 Often, the use of the clamp requires it rest flat on a band saw table or other flat surface. Also, it may need to slide across that surface. For those reasons and to make the clamps more versatile, the bolts, screws and washers used to join the two halves must be counter sunk in the clamp material.

If you haven’t already drilled a hole in the center of the circles, mark the centers with an awl or other pointed object.

If you used a jar lid or other than a template with indexes, you need a means of finding center. In a pinch, this could be done by measuring across the widest part of the two circles and marking the half way points. Repeat this three or more times, moving around the circle. Where the lines intersect should give a reasonable indicator of center.

Using a spade, Forstner or spur bit sized big enough to create a hole the washers will fit in, drill holes in the outer parts of both halves of the clamp, using the holes you just made in the circle centers. Drill only deep enough to get the washer and nut or screw heads flush or just below the surface.

Next, drill a hole big enough for the screw, bolt or dowel, depending on which you chose to use.

Once the hole is drilled, install the screw, bolt or dowel through the two halves of the clamp.

The furniture screw seen in the picture needs a washer only under the nut, but regular screws or a bolt should have a washer under both the head and under the nut.

Install the washer and nut and snug them. You can use a punch at three places around the nut, where it contacts the screw, to lock it in place. If you used a dowel, install two 3/8” panhead wood screws with washers slightly larger than the dowel under them.

The clamp should be snug, but still open and close with reasonable ease. All the screw heads and nuts should be flush or just below the surface.

If part of the bolt or screw extends above the clamp surface, cut or grind it off, though you could use the clamp by just working off the side that is flush. 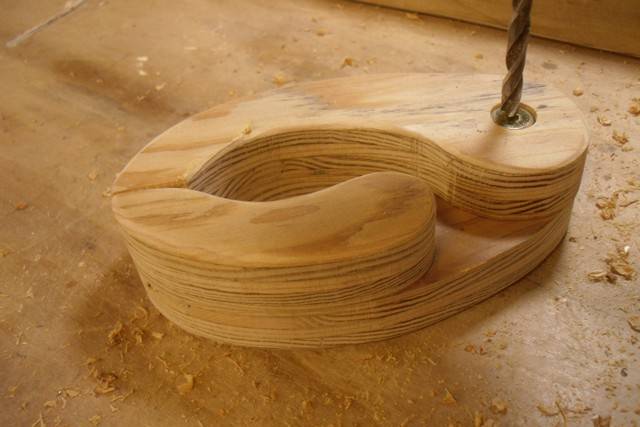 Install the T-nut on the allthread with the barbs pointing in the direction you will be turning it, like in the picture.

If appearance is important, you can switch from a standard nut to an acorn cap nut.

At about center of the open area of the two arms and at the center of the thickness of the arm, make a mark where you will drill a hole through the two arms, and for larger, but shallow, hole to flush mount the T-nut and jam nut.

Using a Forstner, spade bit or spur bit, drill a hole just deep to sink the T-nut and jamb nut flush into the clamp.

In the opposite arm from the one the T-nut will install in, run the drill bit at an extreme angle toward the clamp tip, while keeping it in the center of the wood. Move the bit back and forth to elongate the hole. The longer the hole, the larger the clamp can be opened.

I used my jig saw and a fine blade to clean up the elongated hole, but any means that gets the hole to a point you are happy with how wide the clamp opens is fair game.

Once the allthread is installed, install a washer and the tightening knob.

Open the clamp as far as it can be opened and, with the knob all the way down, cut off the excess all thread [and save it for your next clamp].

Nice idea Kelly. I have used the small and large Jorgensen clamps for smaller items when making my boxes. They sit down nice and flat to ensure verticle cuts, but may consider trying these.
Malcolm

Cool idea . and good build, do you think some 100 grit PSA sand paper on the jaws would give you a better bite on what you’re clamping?

These are cheap enough to make, I shape the jaws. I think sandpaper, rubber and what have you would be an improvement. The apply a lot of force, but somethings still need the jaws shaped. Maybe a couple layers of rubber or foam would be good, since it would mold around items.